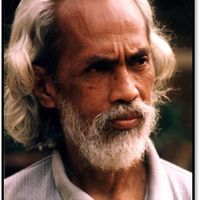 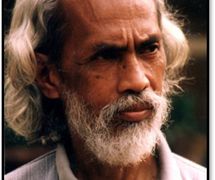 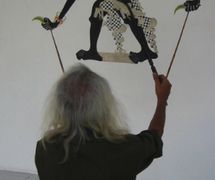 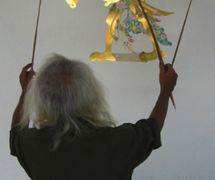 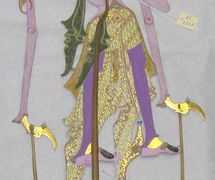 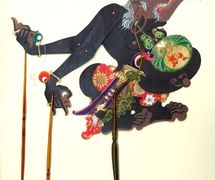 Indonesian puppet master (dalang) and creator of wayang ukur (“carved” wayang). Javanese artist Ki Sigit Sukasman (also known as Ki Sukasman and Mbah Kasman) was the son of a batik artist (Ki is an epithet of respect accorded to a senior dalang). He played with wayang kertas (paper wayang) in his youth and later studied wayang drawing along with other arts at Akademi Seni Rupa Indonesia (ASRI, Indonesian Academy of Visual Arts). Graduating in 1962, he worked as an interior designer in Jakarta before joining the Indonesian delegation to the New York World Fair in 1964 where top artists of that generation presented to international audiences. He spent ten years in the Netherlands painting and working as a dishwasher. He returned to Yogyakarta in 1974 where he mentored emerging visual and performing artists.

Sukasman’s exacting standards and innovations in puppet carving made his “rejects” prized by collectors. His metaphysical or physical interpretations of demons, clowns, and other figures were striking. He lived a Spartan existence documented in the film Memayu Hauing Buwono directed by Dinas Ari Sandi. His shadow theatre performances presented at Pekan Wayang Indonesia (Indonesian Wayang Week festival) in 1999 and the UNIMA Festival in Germany in 2000 used combinations of puppets and dancers’ shadows. Multiple trees of life images would spill onto the screen; lights of varied colours ensured visually interesting productions.

Among Ki Sukasman’s many avant-garde disciples are artists such as Heri Dono (b.1960) who studied with him in the late 1980s and created wayang legenda – startling, expressionistic wayang figures used in performances by traditionally trained dalang but in productions with a modern director. Heri Dono currently does contemporary installation and performance art around the world. Another of his students is Ki Suharno, who carries on aspects of Ki Sigit Sukasman’s wayang work using digital music, projections and other innovations performing wayang ukur for modern audiences.