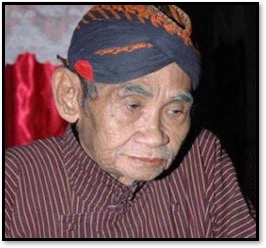 Indonesian puppet master (dalang) of Yogyakarta style wayang kulit (shadow theatre). Ki Timbul Hadiprayinto had only a grade school education (Ki is an epithet of respect accorded to a senior dalang). Born into a family of dalang, son of Guno Wasito and Sinah (daughter of Dalang Ki Proyo Wasito), he became one of the most respected and beloved exponents of Yogyakarta style wayang kulit performance.

Ki Timbul studied with many master dalang: Ki Wiji Prayitno (his uncle); Ki Kasmono for interpretation of story; Ki Gondo Margono for singing (sulukan); Ki Bancak for manipulation; and Ki Nartosabdho for dialogue. He emerged as a performer in the late 1940s. He attended the Habiranda Dalang School in the Yogyakarta Palace for two years. He was a popular performer on RRI (Radio Republik Indonesia) by the 1980s and was given a title/name by the Yoyakarta Palace of “Ki Timbul Cermomanggolo”. Ki Timbul was a favourite of President Suharto during the l980s and 1990s and was later praised by President Gus Dur (Abdurrahman Wahid). In the 1990s, his art was documented in a film on wayang kulit funded by Mobil Oil. He performed with his troupe of thirty in Gamelan Marsudi Budaya.

Ki Timbul innovated banjaran, “biographical” stories which instead of following traditional wayang play structures might, instead, give the whole life story of a single Mahabharata figure, such as the tricky Sengkuni (uncle of the Pandawa heroes who sides against his five nephews) or the noble Gatotkaca (son/nephew of the Pandawa who dies in the Great War, the Bharata Yuda).

He was renowned as a Dalang Kanda Buwana (performer of ruwatan or exorcistic performances). When he first performed this type of ritual wayang in the 1970s, Ki Timbul felt ill equipped. He therefore undertook a three-day meditation and fast in Langse Cave at Parangtritis, a spot of special power in kejawen (traditional Javanese belief). He wrote a book on ruwatan and became known for his ability to protect and benefit those in need of spiritual power. In later life he was known for his ruwatan performances and his invented stories (karangan) that dealt with stories about humans in pursuit of spiritual power (wahyu).