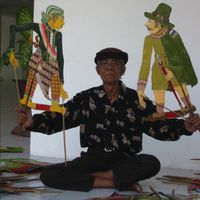 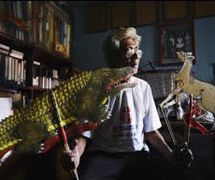 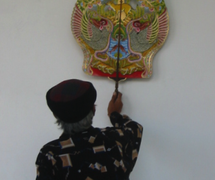 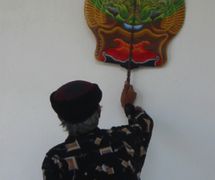 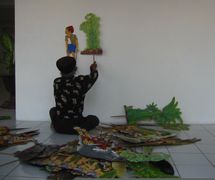 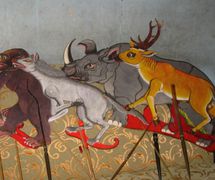 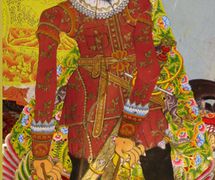 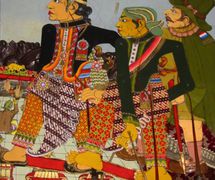 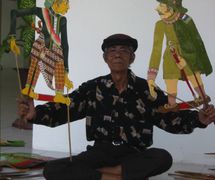 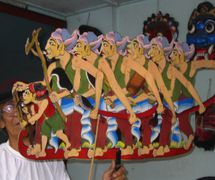 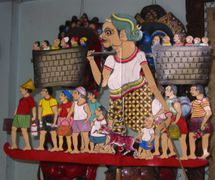 Indonesian puppet master (dalang) of Javanese wayang kulit (shadow theatre) and creator of children-oriented wayang kancil telling mouse deer fables. Ki Ledjar Subroto’s childhood name was Djariman (Ki is an epithet of respect accorded to a senior dalang). His father, although from Yogyakarta, worked for the wayang orang (human/dancer) troupe Nesti Pandowo in Semarang. Djariman always was part of the activities of the troupe and worked with Ki Nartosabdho who emerged from the company to become both the top wayang kulit dalang of his generation and composer of many new songs. It was Ki Nartosabdho who gave him the name Ledjar (“Cheer up”) due to the younger man’s optimistic energy. Ledjar excelled as a costumer for the company.

Looking for stories that would appeal directly to a child audience, Ki Ledjar Subroto (Soebroto) took the traditional Indonesian tales of Kancil, a mouse deer, and beginning in 1980 adapted the stories for wayang-style shadow puppetry. His wayang kancil performances tackle issues while imparting important values such as saving the environment. For the next decade, he often gave wayang kancil performances in the southern plaza adjoining the Yogyakarta palace and trained a number of international students to perform these episodes. Beginning in 2003, he performed sometimes at Gembiraloka Zoo.

Ki Ledjar has made many wayang kancil puppets for international collectors, major museums (Museum Wayang in Jakarta, Tropen Museum in Amsterdam, Museum of Anthropology in Canada). Later, he created wayang proklamasi (which presents the struggle of Sukarno (Soekarno), Hatta and other heroes against the Dutch colonial forces in the 20th century). In 1987, he developed wayang Sultan Agung, which shows the history of 1593-1645 against Jan Pieterszoon Coen (1587-1629, founder of Batavia, today’s Jakarta) and the Dutch East India Company, which he made for the Westfries Museum (the Netherlands). He has also painted murals on related themes.

In 2004, Ki Ledjar developed wayang Jaka Tarub (based on the folktale about a young man who steals the shawl (the “wings”) of a heavenly nymph (bidadari) while she bathes in a waterfall pool, and marries her), combining elements from wayang with ketoprak, a Javanese folk theatre form. In 2008, he preformed and displayed puppets at Pasar Malam Besar (Mega Night Market) in the Netherlands. In 2009, his artistry was honoured as part of the Biennale Jogja X in Yogyakarta. In 2011, he created puppets and performed for the reopening of the Nusantara Museum in Delft, the Netherlands, with a show about William of Orange.