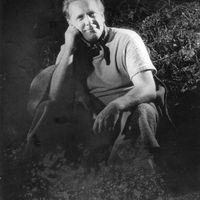 Widely travelled, Gerald Morice lived in Worcestershire, a bachelor who loved the life of a “gentleman of letters”, a man of taste and intelligence, and a stylish and prolific correspondent. He taught young puppeteers what they should aspire to for the benefit of the puppet theatre worldwide. As a critic, he set high standards of performance and scholarship.

Gerald Morice founded the British Toy Theatre Guild, later the British Puppet and Model Theatre Guild in 1925. He published wartime bulletins during World War II for The Puppet Master, the Guild journal, which he occasionally edited. After the war he helped to rebuild Britain’s links with world puppetry through UNIMA, and was instrumental in the setting up of the British UNIMA centre.

He translated Gunter Böhmer’s book Puppets through the Ages (London, Macdonald, 1971), and between 1938 and 1982 wrote weekly columns on national and international puppet and model theatre for the circus and variety journal, The World’s Fair, and occasionally for The Stage under the name of Charles Trentham.

With George Speaight he discovered the Tiller Clowes puppets in an old barn and directed them in The Old-Time Marionettes, a reconstruction of a Victorian fantoccini show using the renovated figures. Their first performance was in 1951, in a purpose-built theatre on the Festival of Britain site in Battersea Pleasure Gardens, London. His vast collection of theatre memorabilia was bequeathed to the Victoria and Albert Museum, London.