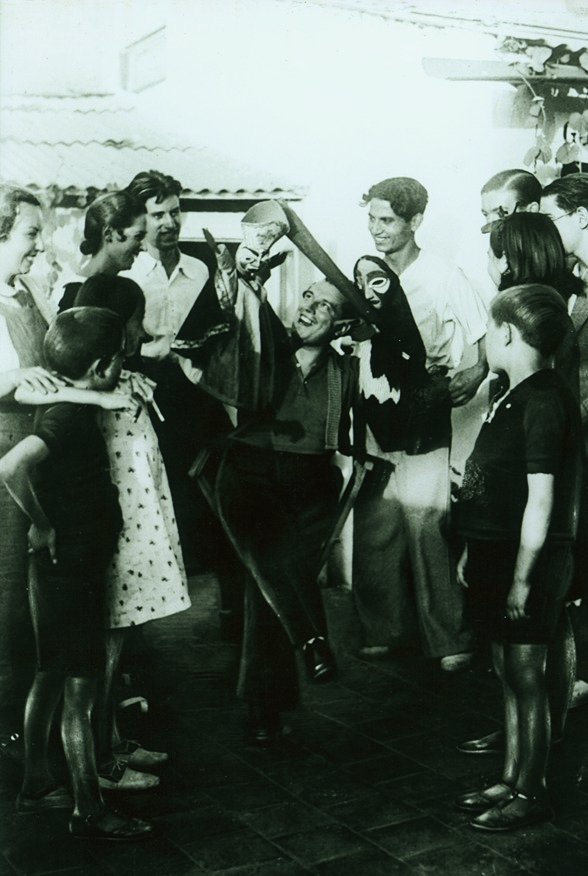 Spanish writer and poet, whose dramatic work includes pieces written for puppet theatre. These can be divided into two parts. The first part is in a “colourist” and musical style, such as La Pájara pinta (The Speckled Bird) and, perhaps, El Colorín colorado (The Red Goldfinch). The second part consists of his political farces.

Alberti created La Pájara Pinta as a piece of theatre mixing poetry, puppetry and music. It reflects the influence of Vittorio Podrecca’s Teatro dei Piccoli performances he saw in Madrid and the suggestions of composer Oscar Esplá, to whom he presented the prologue and the first act in 1926. In the prologue, Pipirigallo, a bald character covered with bells and holding a baton, introduces the play’s protagonists – all heroes from children’s songs. He does not use words but rather consecutive syllable games spoken to a bright musical rhythm. Alberti did not finish the play that became lost between the Spanish Civil War and exile. It was later rediscovered by Robert Marrast in 1964 and Carlos Ruiz Silva in 1982 and was shown with puppets for the first time in a version directed by Gonzalo Cañas with music by Carmelo Bernaola in 1987.

Marked by the political theatre of his time, Rafael Alberti also published two short farces in 1934. Both El bazar de la Providencia (The Bazaar of Providence) and La Farsa de los Reyes Magos (The Farce of the Magi) were characterized by a strongly anti-clerical tone. His characters are bishops, priests, civil guards, landowners and common people.

After the outbreak of the Spanish Civil War, Rafael Alberti wrote Los Salvadores de España (The Saviours of Spain, 1936) wherein, next to the bishop and the general, appear the representatives of the allied rebel forces – Italians, Germans and Portuguese. His play Radio Sevilla (1938) was inspired by his previous work, but has a sharper dramatic focus on the figure of the sinister General Queipo de Llano, whom he portrays in a merciless and joyful manner. These works were brought together in what was called “teatro de urgencia” (theatre of urgency; generally short propagandistic or didactic plays about the war) and were shown with both actors and puppets at the fronts of the Spanish Republican camp.